For this newsletter, I am writing about my recent mountain-climbing trip to Colorado. In particular, it was my goal to summit at least one “14’er” every day. What is a 14’er, you may ask? It is a mountain over 14,000 feet high in elevation and having a certain degree of prominence compared to the area around it with isolation from the closest taller peak. There is no standard measure of these last two conditions, leaving room for arguments about whether some mountains/peaks count. More on that in Part 2, next week.

What got me on this quest was climbing Mount Elbert (the highest mountain in Colorado at 14,440 feet), last summer. It is my goal to summit all the western states, except Alaska. So far, I’ve accomplished eight of them. While in Colorado last summer, I heard a lot of chatter from other climbers about other 14’ers they had done. There is nothing like a list to get me motivated to do something, so I decided at that time to return to the Rocky Mountain State as many times as necessary to summit as many 14er’s as my abilities would allow. I need to get going on such things, before I get too old. So, on June 25, I took my chances with the Coronavirus and headed to Denver for a week with my son to get started on that mission.

On our first full day, it was our goal to climb Mount Evans (14,261 feet) and Mount Bierstadt (14,060 feet). The second was a particular goal because I like the name, it means “beer city” in German. However, unfortunately, the road up Mount Evans, the highest paved road in the United States (yes, it’s higher than the Pikes Peak road), was closed before Summit Lake, where I planned to start. From the summit of Mount Evans, I planned to descend along a ridgeline and then ascend nearby Bierstadt. It would have been a pretty easy first day.

When that plan was rebuffed, we moved to “Plan B”, what we meant to do the following day, Grays Peak (14,278 feet) and Torreys Peak (14,275 feet). I like to plan a hike carefully the day before and didn’t have the chance in this case, so I chose to go off of the road directions in my book, ‘The Colorado 14ers – the Best Routes’ by the Colorado Mountain Club Foundation.

We headed west on the I-70 a bit and up a dirt road to the trailhead. Suddenly, there were cars parked all over the place, well before the trailhead. I was worried the rest of the road was too difficult to pass; and because it was private land, parking along the way to the trailhead was prohibited. This was a mistake, as after a short rough spot right after this unofficial parking area, the road was not bad at all and would have been easily driven in the Jeep Cherokee I rented. There was plenty of available parking at the trailhead as well. I was given bad advice at this parking area, which just goes to show to take trailside advice with some skepticism.

Once we walked up the road 1.5 miles, we reached the trailhead and began a beautiful hike. Many 14’ers start in the woods, below the tree line. At a certain altitude, around 12,000 feet the trees give way to shorter vegetation inhabited by marmots and picas. Then, at about 13,500 feet, the plants no longer grow and it becomes hiking from one rock to another. This hike began near the end of the tree line and was a well-worn trail until the point it became mostly rocks. 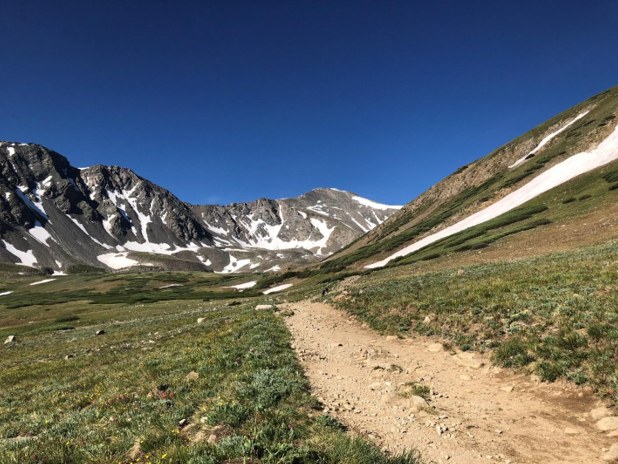 Early on the trail to Grays Peak, seen in the distance

The trail was easy to follow until it got to a point in the rocky area where it forked. I asked someone struggling with altitude sickness which way to go. He explained the left path went to Grays Peak and the right one to Torreys Peak. According to my reference guide, it is common to do both peaks in a circular manner at this point. I asked for advice on which to do first and was told most people went to the left, doing Grays Peak first. In hindsight, I don’t think it makes much difference. 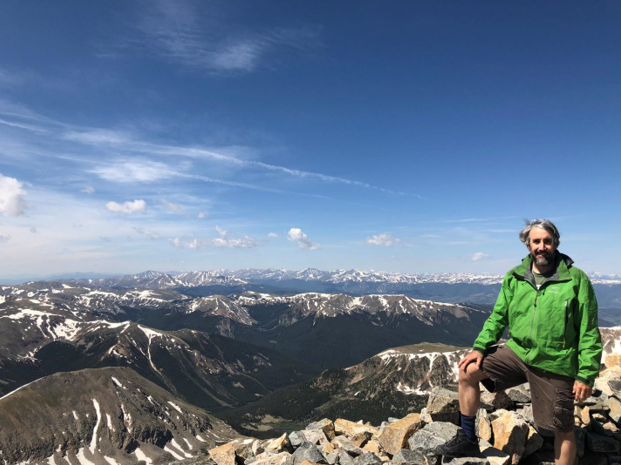 The next section was more difficult, basically going up a large steep pile of rocks. However: “The more the challenge, the more the fun.” as I always tell my son. About 30 minutes later, I was atop Grays Peak with about a dozen other hikers. At this point, it is customary to take a break and summit photos. 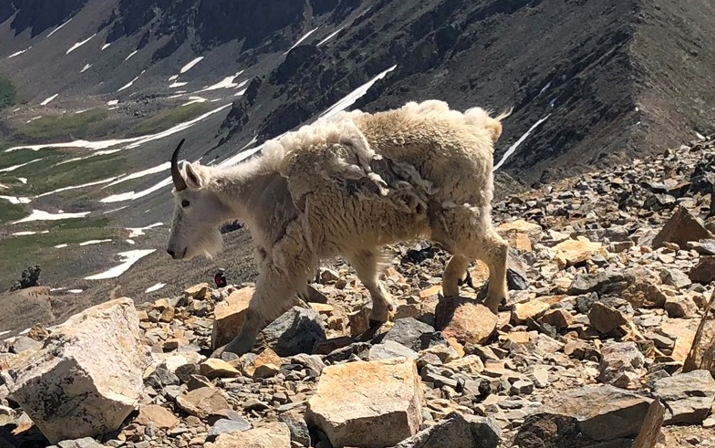 While getting ready to leave and head across the ridgeline to Torreys Peak, a mountain goat came along. I had never seen one outside of a zoo or on a poster with a meme before. It looked like he was half-way through shedding his winter coat. Then it was a simple down and up the ridge between Grays and Torreys. 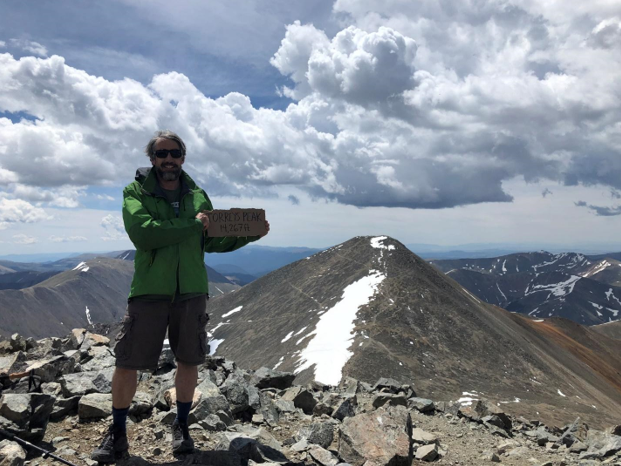 Torreys Peak, with Grays Peak in the background

At the summit of Torreys, somebody conveniently left a sign. This would happen at every peak for the rest of the trip.

On the way back down, it snowed a little bit. I have seen it snow on the Fourth of July in California, atop White Mountain Peak (14,252 feet) in California, which goes to show to expect anything in terms of weather at high altitudes.

All things considered, it was a good and successful hike. Here are the basics, if I’ve inspired you to do it yourself:

Finally, everybody says that thunderstorms often strike in Colorado in the afternoons. Most climbers strive to start as early as 7 AM, to be hopefully done before any bad weather sets in.