Casino Scene in Dr. No 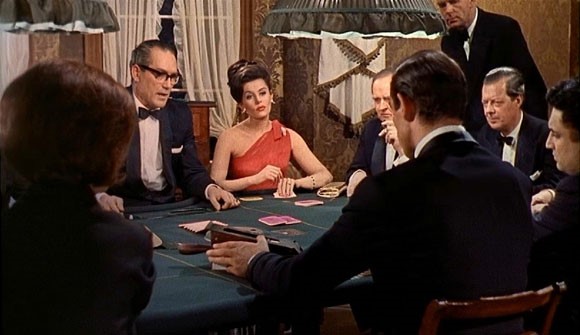 One project idea I would love to do is a video breaking down the various casino scenes across James Bond movies. I’d like to do it in the style of the video Alex Honnold Breaks Down Iconic Rock Climbing Scenes. I have yet to figure out how to get digital versions of the needed movies, not to mention overcoming the legal obstacles in showing such clips. However, I can at least prepare ahead of time.

In many of the casino scenes, especially in the earlier movies, Bond is seeing playing chemin de fer. I just completely rewrote that page with detailed information on procedure and a more in-depth analysis of situations where there is free will to draw or stand. The previous version of the page was based on what I now think was an incorrect belief that the banker had complete free will as long as neither side had a natural. According to The New Complete Guide to Gambling by John Scarne, there are only three situations with free will:

All that said, the rest of this video shall refer to the video James Bond, Introduction - Dr. No. This is an iconic scene as it is the first time, in any, what I would say "official" James Bond movie, we see Bond, hear the Bond theme (except in the opening credits), and hear Bond introduce himself as "Bond...James Bond."

Hand 1 -- The first shown hand starts at the 0:13 point. Silvia Trench is betting on the Player Hand, while Bond is betting on the Banker Hand. No other players are involved. The casino staff are only facilitating what is a player-banked game, with Bond acting as the banker. When the banker wins, the casino collects a 5% commission from the win. The scene starts with Trench saying "suive," which means "follow" in French. This implies she lost the previous hand and as is her right, she invokes the option to play alone against Bond the next hand. We don't see any cards in this hand, so forgive me if I don't discuss it. However, it is clear from context that Bond won the hand.

Hand 2 -- At the 0:28 point, Trench invokes her option to play alone against Bond again with another "suivi." After checking her cards, she asks to draw another. Then Bond checks his cards and reveals a natural 8. As in baccarat, if either side has a natural 8 or 9, then neither side may draw. Bond correctly does not give her a third card because he already won with a natural 8. Then Trench reveals her losing total of 2.

Hand 3 -- At the 0:43 point, Trench invokes her option to play alone against Bond again. It would seem she doesn't have enough chips and asks for, and is given, casino credit for the difference between her chips and the required bet. Like the previous hand, Trench asks to draw a third card to which Bond reveals a natural 9. It is not necessary to show Trench's cards as Bond's 9 would beat anything Trench might have if she were to draw.

After some now famous banter, the next hand begins at the 1:13 point. Here Trench asks to raise the limit. Bond, as banker, could have done so without needing permission, up to 2x the previous limit. As the player, Trench had the right to ask for the increase and it was up to Bond to accept or deny the request. We see him, of course, accept it. When was Bond ever afraid of a large bet? I would too if I won every hand, as Bond seems to, in every movie. After the bets are down, we see Trench get a natural 8, to be beaten by Bond's natural 9.

Next week we will look at Bond playing chemin de fer again in the movie Thunderball. However, if you can't wait, there is a lively discussion of the Bond casino scenes in my forum at Wizard of Vegas.

Until next week, the odds be with you.