Are there any casinos in Vegas besides Mandalay Bay where the dealer stands on a soft 17? I ran a shoe of Spanish 21 at MGM. I don't see any advantage with the tens missing. Especially on double downs.

As far as I know, the vast majority of shoe games in Vegas stand on soft 17. Usually the dealer will hit a soft 17 in single-deck games and double deck can go either way. I try to explain why card counting words in my page on card counting.

Do have any knowledge about the policies of online casinos with regards to reporting winnings to the Internal Revenue Service? If so, please provide as much info as you can. Thank you.

I’m quite sure none of them report anything.

I’ve finally accepted a job in Vegas, and the family will be moving in less than a month. What areas of Vegas are nice to live, what areas are undesirable?

For family living the nicest areas are indeed Henderson and Summerlin. Personally I live in a master planned community called Peccole Ranch, which borders Summerlin. In my opinion the west side, where I live, is better because:

If you ask someone from Henderson they will claim Henderson has less traffic, but there are two sides to that issue, and I think the west side is better in that area too. I’m sure I will hear from somebody from Henderson over this, and am happy to print a rebuttal in the future, because I believe in presenting both sides.

The worst parts of Vegas are around downtown, gradually getting better as you move further away. For something in the middle there is lots of growth on the south side of town along the I-15 and the north side along the U.S. 95.

Hi - long time reader here. Anyway, a couple of us were talking about heading over to Vegas for New Years. Any tips, insights and whatevers about being there as a gambler/partier (I know, never be both simultaneously) would be appreciated.

In my opinion New Years in Vegas is overrated. If you want to welcome the new-year standing shoulder to shoulder with thousands of other people on the Strip then you will succeed. However inside the casinos about the only difference is people wear silly hats. We locals tend to go nowhere near the Strip on December 31. I’m not an expert on the party scene but I suspect you can find that any time.

I'm a regular reader of your site, and appreciate your long history. Since you seem open to non-gaming questions from time to time, I thought I'd pose this to you: I recently returned from a Las Vegas vacation, and while there, noted the extreme absence of solar-panels on buildings. Do you know if there is a reason for this? Of all cities, Las Vegas seems ripe for lots of solar energy production. Conventional solar systems can be done with photo-voltaics, to produce electricity, which doesn't seem to be terribly high demand in Vegas. Solar systems can also be used to heat water. Given the extreme volumes of hot water consumed in hotel showers, laundries, swimming pools and hottubs, I’d expect huge energy savings could be possible here. Any insight into the lack of solar adoption there would be appreciated.

I'm letting my webmaster Michael Bluejay answer this one, since he has the #1 website on saving electricity, at least according to Google. Here is what he says.

Okay, so there are three parties who could use solar panels: homeowners, businesses, and utility companies. Homeowners haven’t installed solar panels in droves because the panels and batteries aren’t cheap, and neither is installation or maintenance. Payback time for photovoltaics is maybe 12 years. It's just not very attractive economically to most people. Businesses could afford the investment, and as soon as they think they'll save money by doing so I imagine they will. Actually, it's very possible that some casinos already use solar energy, but I don't know since I don't make it a habit of checking the rooftops of the casinos, and apparently neither do you. I do know that many area schools have solar panels or are slated to get them.

As for utility companies, and they are investing in solar in a big way. There's the Clark Photovoltaic System at the Clark Generating Station, a 3.1 megawatt facility being built as we speak, and a 70-megawatt solar plant being built near Boulder City, which will be the third-largest in the world. And it will be one of only nine that exist on the whole planet. There's also Daystar1, a smaller facility right next to UNLV, about a mile and a half from the Strip. Also, if I remember right, I saw some traffic signs or streetlights in Vegas with little photovoltaic panels on top, presumably storing the energy in a battery to light the sign/light at night.

Everyone focuses on energy production, but the plain truth of the matter is that we could lessen our environmental impact a lot more and a lot easier through energy conservation. With global oil production declining (we've used half of the oil that exists on the planet), the question everyone's asking is, "How can we find other ways to generate energy so we can keep using ridiculous amounts of it?" The question we should be asking is, "How can we save energy so we don't have to generate so much of it in the first place?" For some answers to that question, see my site on saving electricity.

What is the reason people don't put mirrors on flat roofs in Las Vegas. Wouldn't that cut down on the expense of air conditioning?

I asked my father this question since he has a Ph.D. in physics and also a solar panel on his house. Here is what he said,

It would help, but the economics might not justify it. Probably less than 25% of heat enters houses through the roof. The reflectivity of the mirrors would probably degrade to 60% or less as they age and get dirty. It makes a lot more sense to use that space for water heaters or solar electric panels. On a sunny day, my roof panels provide enough power to run both the A/C and the pool pump, which are my biggest power eaters. When one or both are off, my meter runs backwards. The pool heater panels had the pool temp up to 90 degrees last week. I had to cut back on the pumping time.

I understand why you won’t publish which casinos have the worst air quality. But is there any way you could publish which casinos have the BEST air quality? On your Casino Air Quality Survey, I see that Strip Casinos #2, #3, and #9 all scored well. My wife and I will be visiting in February (we’re staying at the non-smoking Vdara in City Center) and we’d like to know where to gamble. We found out this morning that my wife is pregnant, and the less second-hand smoke, the better. Thanks!

Congratulations! I hope you’ll use Social Security’s popular baby name lists, which I started, to avoid the most popular names.

I didn’t want to embarrass the casinos at the bottom of my list, because my methodology was not the most scientific. However, I suppose I can offer some praise for the top three. Here they are:

I am suspicious whether the $1,000,000 display at Binion's in Las Vegas really contains one million dollars. If it were all hundred dollars bills, then it should have a lot more. Maybe it is just a hoax and there are all $1 bills in the middle. What do you think is in the middle, sandwiched between the hundreds in the front and back? 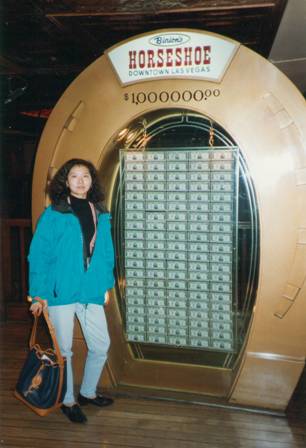 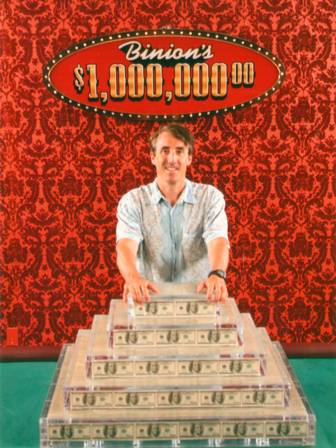 I have no reason to doubt there is a million dollars under that case. Their older, and much better, display clearly had one million in the form of 100 $10,000 bills. For those unfamiliar with them, $10,000 bills are extremely rare and sell for about ten times that at auction. Another reason I don't doubt they have a million dollars on the premises is every Nevada casino has to have sufficient cash to do business, and I imagine the Nevada Gaming Control Board lets Binion's count the money in that display, as a last resort. Ironically, not having sufficient cash on hand was the reason Binion's was closed down in 2004 (source).